Ambear Bow is a bear Shoppet who was released in January 2018 as a part of the first wave of Shoppets. She matches the Shoppie Bella Bow.

A passion for fashion and a Wild Style that totally POPS! That's what Ambear Bow is all about! Just like her twin, Bowdie Bear, this Shoppet knows bows! She creates looks that have the whole of Pawville talking!

Ambear Bow is a lavender bear with a baby blue nose and eyes. She has a lilac heart-shaped marking around her right eye and a swirled section of hair at the center of her head. She wears a large, baby blue ribbon adorned by a magenta paw design. Her outfit consists of a baby blue top with a ruffled white skirt and a magenta ribbon on the side that has a paw on it. 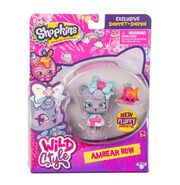 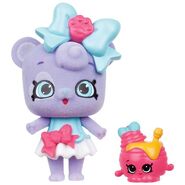