An adventurer with big dreams and kind to the core

Sweet, tart, and a bit saucy

At her core, Apple Blossom is sweet as pie and always up for adventure--she's ready to take a bite out of life!

Apple Blossom is a dark red apple with light pink flowers, green leaves, and a light pink worm poking out of her head.

Her variant is a green apple with yellow flowers, darker green leaves, and an orange worm poking out of her head.

The exclusive So Cool Fridge Apple Blossom is hot pink with a metallic finish, pale pink flowers and gold leaves. The worm is pale pink.

The limited edition version of her from the Swapkins event is very similar to her original version but with a metallic finish.

There is also an exclusive variant of her from the Mystery Edition #3 pack. This variant features her as a pastel green apple with yellow flowers, green leaves, and a pastel pink worm poking out of her head. She is lightly coated with glitter.

There is also an exclusive variant of her from the Shopkins Jewelry Box playset. This variant features her as a pink apple with white and mint green flowers, mint green leaves, and a mint green worm poking out of her head. She has a mint green charm handle. She is lightly coated with glitter.

There are also two variants of her included in the Food Fair series 2 lunchboxes. The first variant is a hot pink fading to light pink apple with a green step, leaves, and flower. There is a pink worm sticking out of her head.

The second variant is very similar, making her a light pink fading to a slightly darker pink apple. She has a light green stem, leaves, and flower. There is a pink worm sticking out of her head.

In Season Nine, she was re-released with a Wild Style look. This variant makes her a translucent green apple with a light green stem and leaves. She has a pink worm sticking out of her head and a seed design on the front of her. She has a red tied headband and red shoes.

There is also a variant of her in the Unicorn Fan Club pack. This variant makes her a light green fading to white apple that is lightly coated in glitter. She is winking on this variant. 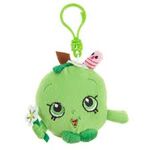 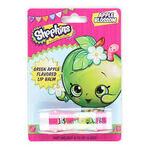 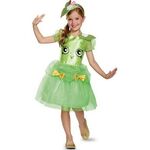 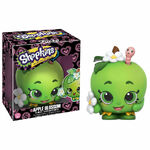 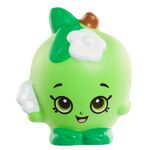 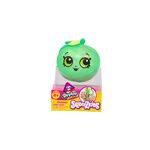 Apple Blossom Squeezkin
Add a photo to this gallery
Retrieved from "https://shopkins.fandom.com/wiki/Apple_Blossom?oldid=121398"
Community content is available under CC-BY-SA unless otherwise noted.