Choc N' Chip are common Sweets Shopkins from Season Six. They are included in the Ice Cream Sandwich recipe.

Choc N' Chip are two ombré golden brown-to-yellow chocolate chip cookies, both of which have four brown-colored chocolate chips on their "foreheads." Chip is standing standing behind Choc, smiling, while Choc is standing in front with slightly squinted eyes and a happy expression. They are both looking at each other. 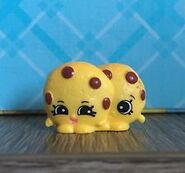 Cartoon Choc N' Chip
Add a photo to this gallery
Retrieved from "https://shopkins.fandom.com/wiki/Choc_N%27_Chip?oldid=118801"
Community content is available under CC-BY-SA unless otherwise noted.