Cinnamon Sally is a rare Bakery Shopkin from the Apple Pie recipe in Season Six.

Cinnamon Sally: A little spice that tastes so nice. She's making baking taste so much better one shake at a time!

Cinnamon Sally is a pink bottle of cinnamon with a purple cap. She has a yellow label with a picture of two cinnamon sticks on her. 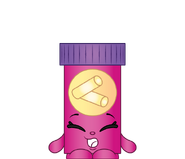 Cinnamon Sally toy
Add a photo to this gallery
Retrieved from "https://shopkins.fandom.com/wiki/Cinnamon_Sally?oldid=112000"
Community content is available under CC-BY-SA unless otherwise noted.