Coralee is a Shoppie released in 2017 as a part of World Vacation Wave Two.

In January 2018, another Lil' Shoppie version of her was released with the Mermaid Coral Cruiser.

All the way from Down Under! Grab your swimsuit and join me and my Shopkins mates as we relax on the beach and explore some reefs! There are so many new Aussie friends to meet during your stay in Australia!

Happiness is grabbing your board and carving up the waves on a hot summer's day! Then chillin' out on the beach with some Petkin mates 'till the sun sets! Now that's a top day Down Under!

Coralee has tanned skin and peach lips, a faint tan blush, and eye-shadow. Her eyes are baby blue, and she has long layered hair of light blue, peach, and purple. She wears a purple headband with pieces of purple, yellow, and peach coral attached to it. She wears a pale pink top with yellow coral neckline, and a sheer skirt striped in light blue, purple, and tan with pieces of tan coral hanging from the waistband. Her shoes are purple jelly heels with coral wrapped around the leg.

Her lips are pink and her hair is mainly light blue and worn in a spiked ponytail, held by a yellow coral headband. Her right-swept bangs and forelock frame her face and are dyed peach. She wears a split pink and yellow dress with purple lining detail and yellow shoes.

Coralee is now a mermaid with lilac lips. Her hair is styled the same way as previously, but her hair is mainly light blue with her ponytail peach, worn with a lilac coral headband. She wears a ruffled light gold top with stars on the shoulder and a lilac starfish at the middle. Her tail is light purple with a lilac star waistband and a large lilac starfish on the side, and her tail is made from light blue scales and stars. 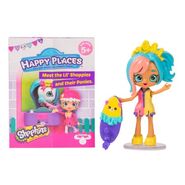 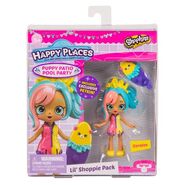 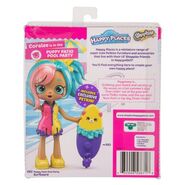 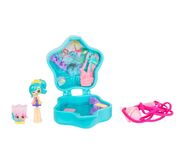 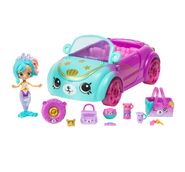 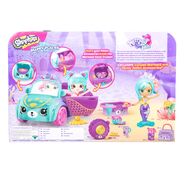 Coralee in the Shopkins App
Add a photo to this gallery
Retrieved from "https://shopkins.fandom.com/wiki/Coralee?oldid=119278"
Community content is available under CC-BY-SA unless otherwise noted.