Start a Wiki
Because of the overwhelming popularity of Shopkins, other companies have decided to cash in on their success and have produced fake Shopkins. Some are quite clearly not Shopkins, but others look almost identical to Shopkins. Moose Toys, the company that produces Shopkins, has even created a YouTube video about how to spot fake Shopkins merchandise. These products are commonly found on Ebay or Amazon, and can be found at some dollar stores, too.

The quality of these toys is typically worse than that of Shopkins. They tend to be made of a cheaper plastic that sometimes has a rubbery feel to it, and they have cheaper paint jobs. Some of the packaging says "Shopkins" on it, while others have made up names that are some variant of the word "shopping." Some blind baskets in fake 12 packs actually can be seen through the package or have the Shopkins visible and not individually wrapped as soon as you open the package. On the back of some packs, most of the categories are "Funny Sweet" and have random Shopkins in the categories. Many packages have the toys inserted sideways or backwards, a flaw that isn't common in real Shopkins packages.

Counterfeit Shopkins which say "Shopkinsins" at the top of the packaging 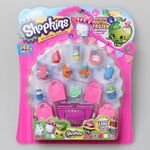 A counterfeit Season One twelve pack

The back of a counterfeit Shopkins set 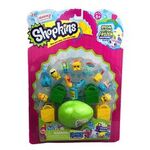 A counterfeit "Shopkinsins" pack with dolls that do not resemble Shoppies

A counterfeit version of the Small Mart playset
Add a photo to this gallery
Retrieved from "https://shopkins.fandom.com/wiki/Counterfeit_Shopkins?oldid=123670"
Community content is available under CC-BY-SA unless otherwise noted.