Daisy Donut is an Exclusive Shopkin sold with Rolly Donut in the playset Donatina's Donut Delights.

Daisy Donut is a pink donut Shopkin topped with yellow icing and white sprinkles. She is looking to her left and lifting her left arm. 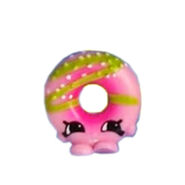 Daisy Donut toy
Add a photo to this gallery
Retrieved from "https://shopkins.fandom.com/wiki/Daisy_Donut?oldid=118946"
Community content is available under CC-BY-SA unless otherwise noted.