Donatina is a Shoppie who was first released in December 2015 with the Donatina's Donut Delights playset.

In October 2016, a new version of the character was released in the Chef Club line.

In June 2017, a World Vacation variant of her was made for Season Eight Wave Three.

In August 2017, a Lil' Shoppie version of her was released with the Gourmet Kitty Kitchen Welcome Pack for Happy Places Season Three.

In January 2018, a Wild Style version of her was released. This variant corresponds to the Shoppet Duncan and the Sweet'n'Squishy Tribe.

In August 2018, a new version of her was released for the Lil' Secrets line.

Life's a "hole" lot of fun for Donatina! With her head in the clouds, she's a "happy-dough-lucky" kinda girl who samples more donuts than she sells! As sweet as pink frosting, she's always 'round to help her friends!

Donatina is a fair-skinned girl with big, brown eyes. Her hot pink hair is pulled into two buns with curled forelocks and straightened bangs that have a streak of lighter pink on the right. She wears a yellow headband with three donuts on it and a white and pale pink striped hat. She is wearing a light pink shirt with a powder blue collar, brown buttons, brown sleeves ruffles, and a brown ribbon tied around her waist. She is also wearing a pink tulle skirt, white tights, a pink bracelet, and pink Mary-jane shoes with a pale pink donut heel and sprinkle covered icing details, along with pale yellow accent and a tiny donut on the strap.

This version has hot pink lipstick and hair worn in curled pigtails held by pale pink donuts. Her bangs are straightened. She wears a tan dress that resembles a donut, with the upper portion of her skirt pale pink. Over it is a white apron, and she wears pale pink socks and pink shoes with a donut on them.

Donatina has light pink lipstick and blush, and pale yellow eye-shadow. Her hair is mainly pale pink with a hot pink undertone and is worn straightened with a short side-tail and long bangs blended with her angle cut forelocks that frame her face. She wears a beige headband and chef hat with a chocolate iced donut on the top covered in yellow and blue sprinkles, with a hot pink donut icon on the side. Her dress is pale pink with raised hot pink sleeves and waistband connected to a frosted donut apron. She has gold buttons on the torso and a baby blue cloth tied around the neck. Her skirt is tulle and covered in donuts and she has a brown sprinkled, scallop layer beneath it. She also wears white tights and pink shoes with hot pink accent.

Donatina has an orange highlight in her brown eyes and she wears rosy blush, coral lipstick, and chartreuse eye-shadow. Her long hair is worn in several, large curls with streaks of pale pink and chartreuse, and she wears a yellow headband adorned with colorful tropical fruits, donuts, and pale pink hibiscus. Her outfit consists of a yellow tank-top with a hot pink flower and a dark purple choker, along with a yellow tulle skirt that has a rim of pale blue, and a petticoat of red, all of which are covered in donuts, fruits, and flowers. She wears a pair of yellow and pale pink sandals with a hibiscus flower on the toe strap.

Donatina wears her long magenta hair straightened with a pair of buns and her bangs entirely pulled back with random streaks of light blue. She wears light blue eye-shadow and dark pink lipstick, along with a pink headband with cream-colored monkey ears that have hot pink donut earrings, and a cream monkey tail. She wears a crimped pale yellow top with a pale pink vest that has a fuchsia design at the middle and donut lining around the bottom. She also wears white tulle shorts with scallop lining and a pattern of donuts, pale eyellow and light blue sprinkles, and a curled fuchsia line around the hem. Her pale pink shoes have the same curled design and a brown donut on the top, and the sole is cream. She wears light blue stockings with white curled line design.

Donatina's eyes have a gold streak to accent her eye-shadow. Her long hot pink hair is pulled into a ponytail and her bangs are brushed into one segment on the left of her forehead. She has streaks of pale pink through it to accent her lipstick, and she wears a magenta headband with a gold bow and winged, stylized pale pink, magenta, and gold donut. She wears a pale pink top with magenta wing sleeves and frilly trim, with white fabric covering her neck and adorned by a yellow ornament resembling the donut from her headband, along with magenta puffed shorts covered in pale pink diamonds, dots, and donuts, and going down the middle of each leg is a stripe of pale yellow. She also wears a yellow bracelet and white boots with yellow donuts going down the middle, border, and magenta foot.

Her Chef Club version has the same accessories except for the purse, now have Dippy Donut and Chrissy Cream as the Shopkins and have a different look. 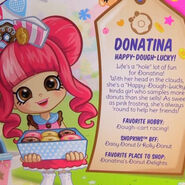 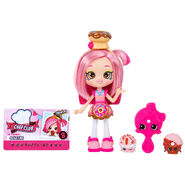 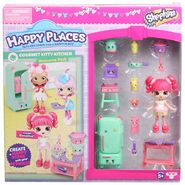 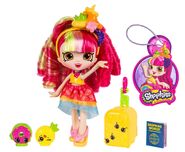 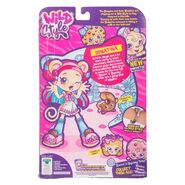 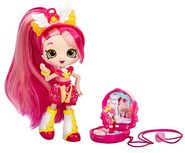 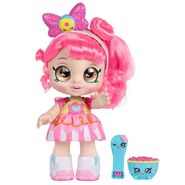 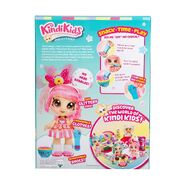 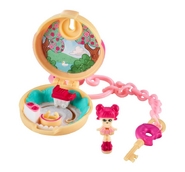 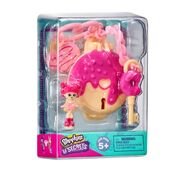 Kindi Kids Donatina on Wal-Mart's 2019 Christmas standee.
Add a photo to this gallery
Retrieved from "https://shopkins.fandom.com/wiki/Donatina?oldid=120879"
Community content is available under CC-BY-SA unless otherwise noted.