Duncan is a monkey Shoppet who was released in January 2018 as a part of the first wave of Shoppets. He matches the Shoppie, Donatina, and the Sweet'n'Squishy Tribe.

Duncan loves donuts but loves pranking even more! Cheeky and sneaky, he tries to behave but when he sees an opportunity for some trickin' he can't help himself! When he gets together with his BFF Coco Anna, the streets of Pawville get even sweeter!

Duncan is a tan monkey with a lighter colored face and paws. His nose is brown to match his eyes, and his inner-ear is pink. At the middle of his head is a swirled section of hair, and he wears two donuts and a white hat. His outfit is composed of a light pink sleeveless top with a light blue collar and a chain of donuts around his waist, paired with white shorts. 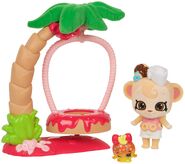 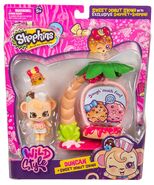 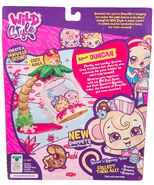 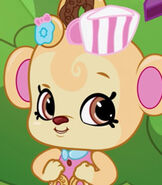 Cartoon Duncan
Add a photo to this gallery
Retrieved from "https://shopkins.fandom.com/wiki/Duncan?oldid=120447"
Community content is available under CC-BY-SA unless otherwise noted.