Fleur Flour: Loves to shake things up in the kitchen. She takes the cake when it comes to makin' baking!

Fleur Flour is a white fading to blue ombré sack of flour. Her top is open, and there is a purple spoon sticking out. She has a pink label that reads "FLOUR" on it. 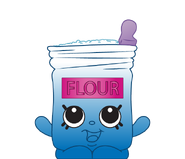 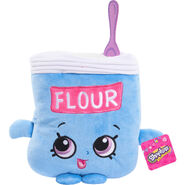 Fleur Flour plush
Add a photo to this gallery
Retrieved from "https://shopkins.fandom.com/wiki/Fleur_Flour?oldid=114634"
Community content is available under CC-BY-SA unless otherwise noted.