For the Shoppie that shares her name, click here.

One of a Kind

Gemma Stone is a large crystal with big purple eyes, purple shoes, and a purple crown. She also has a pearl necklace on her head and a triple-layer pink pearl bracelet on both of her arms. 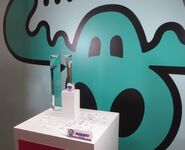 Gemma Stone on display for the Toy Fair

Gemma Stone figure
Add a photo to this gallery
Retrieved from "https://shopkins.fandom.com/wiki/Gemma_Stone?oldid=121762"
Community content is available under CC-BY-SA unless otherwise noted.