Gemma Stone is a Shoppie who was released in November 2016 on Black Friday as a Walmart exclusive. She is based on the one-of-a-kind Gemma Stone Shopkin that was auctioned off in February 2015 as a benefit for the Toy Industry Foundation.

In March 2019, a Lil' Secrets version of her was released with the Genie's D'lish Wish Café Secret Lock as a part of Lil' Secrets Season Two.

Gemma Stone- It's my time to shine!

With a sparkling gleam that's rarely seen, Gemma Stone truly is "one of a kind"! She has something that everyone is searching for... natural beauty and a shining personality that makes her totally precious!

Favorite Place To Hang Out: The Red Carpet!

Gemma's hair is an extremely pale shade of blue with streaks of tinsel, and some very pale pink at her bangs/fringe. Her eyes are a very pale blue, which turns into the palest shade of pink at the lower part of the iris. Dressed as a queen with a silver ring of pearls adorning the bottom part of her purple crown, Gemma wears a shiny blue and purple dress that seems to shimmer. In addition, she wears a blue ombré cape with white fur trim, and a pair of translucent purple wedges that have blue diamond heels.

There are a total of six possible gemstone-themed Shopkins available with Gemma, but she only comes with four of them. Two are visible in the package, and two are in blind bags. Of the two that are in blind bags, there is a chance of getting any one of four different characters, including a chance of getting a limited edition one, Opaletta. She also comes with a diamond-themed purse that actually opens, and a removable cloak and skirt. 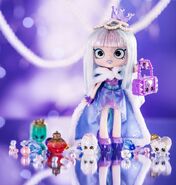 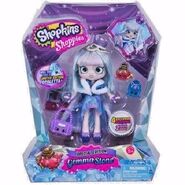 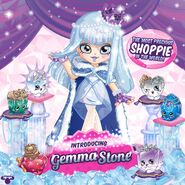 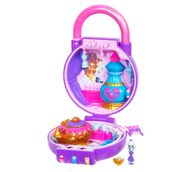 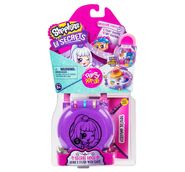 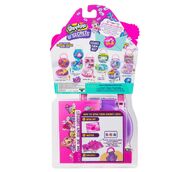 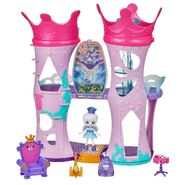 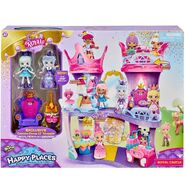 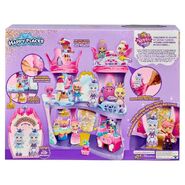 Royal Castle with Gemma Stone backcard
Add a photo to this gallery
Retrieved from "https://shopkins.fandom.com/wiki/Gemma_Stone_(Shoppie)?oldid=120079"
Community content is available under CC-BY-SA unless otherwise noted.