Googy is a common Dairy Shopkin from Season One.

Clumsy and shy. They're always trying to get me to come out of my shell.

Googy is a white egg that is cracked at the top. There is yellow yolk oozing out of his head.

His variant is colored yellow and has an orange yolk oozing out of his head.

His variant in The Oh So Real Mini Packs he is a white egg with yellow yolk oozing out of his head, he has orange feet and hands. He comes in the Eggo Waffles Mini Pack. 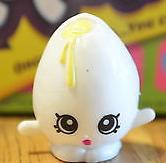 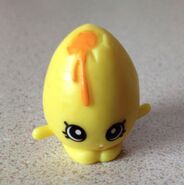 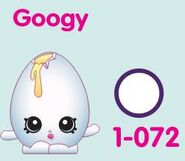 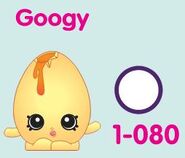 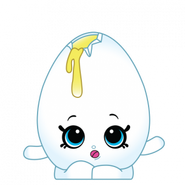 Googy Collector's Edition toy
Add a photo to this gallery
Retrieved from "https://shopkins.fandom.com/wiki/Googy?oldid=119762"
Community content is available under CC-BY-SA unless otherwise noted.