Hot Apple Pie is an Exclusive Shopkin from Season One. She is included in the Bakery Stand Playset with Rolly Roll.

Hot Apple Pie: Gentle and warm on the inside but with a thick skin.

Hot Apple Pie is a yellow apple pie with three yellow leaves (which are golden brown in her collector's tool art) on top of her head. She is eating a red apple.

In her static artwork, she appears to be golden brown with green feet. She has two golden leaves atop her head, and she is eating a red apple with green leaves 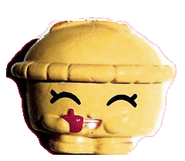 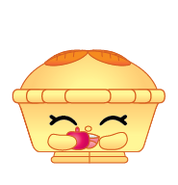