Kinstructions are a line of Shopkins similar to Mega Blox and LEGO that allow you to build your own Shopkins stores. They were released on December 1, 2015. Mini Packs are the smallest, cheapest packs of Kinstructions. There are two different versions of each mini pack.

Every Kinstructions figure is made up of interlocking pieces that you can mix and match, allowing you to create your own unique Shopkins characters!

The Checkout Lane is a mini pack that has 62 pieces. One version contains D'lish Donut's variant and Soda Pops. The other versions contain Lippy Lips' variant and Polly Polish's variant, and Penny Pencil with Kelly Calculator. The checkout lane itself is pink and features a gray conveyor belt, (what appears to be) a yellow scale, a pinpad, and a pink polka dot sign that reads "1." The checkout lane in both versions appears to be identical. 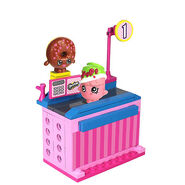 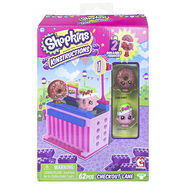 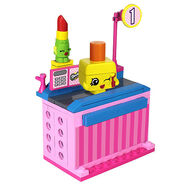 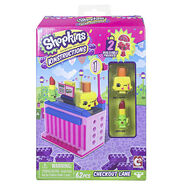 Version with Lippy Lips and Polly Polish, boxed
Add a photo to this gallery

The Shopping Cart is a mini pack that has 37 pieces. One version contains Strawberry Kiss and Posh Pear, while the other versions contain Freezy Peazy and Wild Carrot's variant, and Cream E Cookie with Patty Cake's variant. The shopping cart itself is pink with a yellow basket, yellow wheels, and a yellow handle. It resembles the shopping cart included in Small Mart. The cart in both versions appear to be identical. It also contains what appears to be a blue stand. 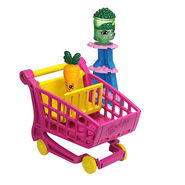 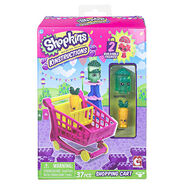 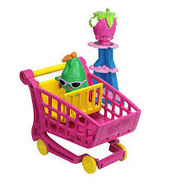 Version with Posh Pear and Strawberry Kiss, unboxed
Add a photo to this gallery
Retrieved from "https://shopkins.fandom.com/wiki/Kinstructions_Mini_Packs?oldid=61293"
Community content is available under CC-BY-SA unless otherwise noted.