Kinstructions are a line of Shopkins similar to Mega Blox and LEGO that allow you to build your own Shopkins stores! They were released on December 1, 2015. Scene Packs are bigger and more expensive than the building sets.

Every Kinstructions figure is made up of interlocking pieces that you can mix and match, allowing you to create your own unique Shopkins characters!

The Cupcake Cafe is a scene pack with 192 pieces. This pack includes D'lish Donut, Soda Pops' variant, Cupcake Chic's variant, and Suzie Sundae. The Cupcake Cafe itself is a cafe with white walls and a pink floor. Inside the cafe is a pink table with three yellow chairs, four drinking glasses, and a counter possibly marking off the employee's only section where the food might be prepared. On top of the cafe is a white sign with an "S" surrounded by a jagged pink circle, and another sign reading "Shopkins Cupcake Cafe" with pictures of cupcakes, coffee, and a pink Shopkin somewhat resembling Meltin Muffin from the Food Fair. This pack also contains a smaller version of the Cupcake Cafe sign on top of the cafe itself, and what appears to be a white cupcake display shelf. 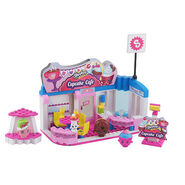 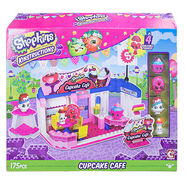 Add a photo to this gallery

The Bakery is a scene pack with 192 pieces. This pack includes Kooky Cookie, Cupcake Chic, Lana Banana Bread, and Sponge Cake. The bakery itself is a small shop with white walls and a yellow floor. Inside the bakery is several blue windows, some white drawers, a yellow table, and a blue cash register. On the bakery's walls is art of D'lish Donut, Kooky Cookie, Mini Muffin, and Cupcake Chic--all Shopkins from the Bakery team. On top of the bakery is a sign of a cartoon donut that has a napkin wrapped around the bottom of it. On the napkin it reads "Shopkins Bakery." Also included with the bakery is a yellow stand with pink shelves to display the food on, as well as a smaller version of the sign on top of the bakery with a small light on top of it to light it at night. 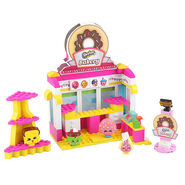 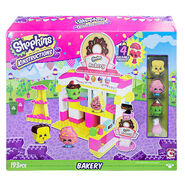 Add a photo to this gallery
Retrieved from "https://shopkins.fandom.com/wiki/Kinstructions_Scene_Packs?oldid=76684"
Community content is available under CC-BY-SA unless otherwise noted.