Lil' Blaze: Can be a little hot headed! Sometimes a bit hard of hearing, tends to get a lot of wax in her [sic] ears.

Lil' Blaze is a top tier of a birthday cake with a white cake and plum frosting. He also has five royal blue candles on his head.

His variant is a top tier of a birthday cake with a yellow cake and orange frosting. He also has five pink candles on his head. 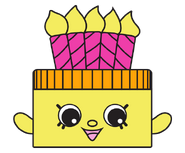 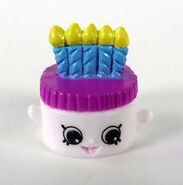 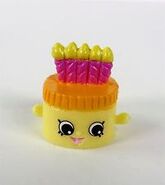 Cartoon Lil' Blaze
Add a photo to this gallery
Retrieved from "https://shopkins.fandom.com/wiki/Lil%27_Blaze?oldid=116298"
Community content is available under CC-BY-SA unless otherwise noted.