Lotta Balloons: A bunch of fun who brightens up any room as soon as they enter. Positive and up, they rarely feel deflated! Usually the last guys to leave the party!

Lotta Balloons are three balloons poking outside of a blue balloon weight bag. The first one is purple, the second one is yellow, and the last one is blue.

Their variant is three balloons poking outside of an orange balloon weight bag. The first one is green, the second one is pink, and the last one is orange.

Another variant of them is included in the Season Seven Collector's Case. They are three balloons poking out of a translucent pink balloon weight bag. The first balloon is hot pink, the second is yellow, and the third one is a translucent pink. This variant glows in the dark. 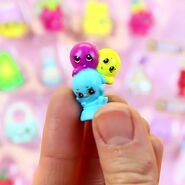 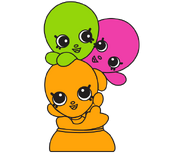 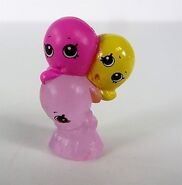