Lucy Smoothie is a smoothie Themed Lil' Shoppie who debuted in 2016, She is part of the Kitty Kitchen category and was released with the Sparkle Hill Happy Home.

In February 2017, she was released as a full-sized Shoppie in Core Dolls Wave 1.

Later in 2017, she was released with the Food Fair Super Shopper Pack.

In March 2019, a Lil' Secrets version of her was released with the Rodeo Smoothie Bar Secret Locket as a part of Lil' Secrets Season Two.

Sweet and cheeky, Lucy Smoothie sometimes lands herself in a jam! But this smooth talker always gets out of any sticky situation. Bright and sassy, this fruity cutie loves to delight her friends with a berry sweet summertime treat!

Her lips are pale pink and her eyes are baby blue with streaks of pale pink in them, and her eye-shadow is cream. Her pink hair is worn in a long fish plait with her bangs mostly covering the left of her face and the rest pulled back, and dark pink tinsel is strewn through her hair. She wears a pink headband with leaf, a strawberry covered in whip cream, and a smoothie. She wears a hot pink blouse with strawberry sleeves and a pair of leaf attached to a pale pink flower at the center of the chest. Her skirt is scalloped and covered in gold seeds with a pearl pink peplum that resembles dripping liquid. Her gold tights are covered in dots, and her heels are hot pink strawberries with leaf decorating the top of the foot.

Her eyes and lipstick is the same but she wears pearl pink eye-shadow. Her strawberry colored hair is worn back in thick, tightly curled pigtails, and on the side is a large white bow covered in strawberries. Her outfit is composed of a baby pink top with a heart at the middle and glittery leaf collar. Her ruffled sleeves are hot pink, and her skirt matches her bow but is trim with pink lace. She wears baby pink strawberry heels with glittery leaf on the foot. 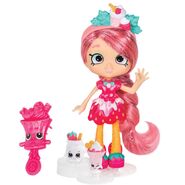 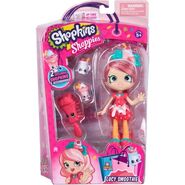 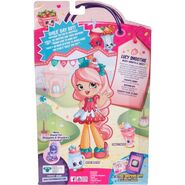 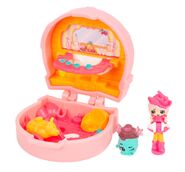 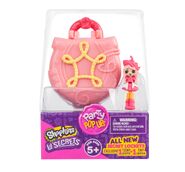 Rodeo Smoothie Bar with Lucie Smoothie boxed
Add a photo to this gallery
Retrieved from "https://shopkins.fandom.com/wiki/Lucy_Smoothie?oldid=119238"
Community content is available under CC-BY-SA unless otherwise noted.