Minty Paws is a tiger Shoppet who was released in March 2018 as a part of the second wave of Season Nine Shoppets. She matches the Shoppie Peppa-Mint and the Frozen Flakes Tribe.

There’s never enough time in the day for Minty Paws. Every day’s a new adventure for this “No Fear“ Shoppet! There’s so much she want [sic] to get her paws into. Her Shopkin - Crystal Snowflake is always telling her to chill before she has a meltdown. But Minty Paws has too many places to explore with her tribe!

A mint tiger with emerald facial markings and ears. Her eye markings are pale mint and her paws and muzzle are white. She has a baby pink nose and eyes. On the side of her head is a pink bow with an ice cream cone to match her dress, which is composed of pale pink frilly fabric with a brown waffle cone vest and hot pink syrup dripping down from it. 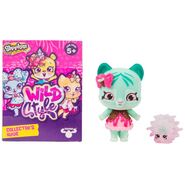 Cartoon Minty Paws
Add a photo to this gallery
Retrieved from "https://shopkins.fandom.com/wiki/Minty_Paws?oldid=120452"
Community content is available under CC-BY-SA unless otherwise noted.