Ice Cream
Peppa-Mint is a Shoppie doll who was originally released in December 2015.

A Lil' Shoppie version of Peppa-Mint was produced in December 2016 as part of the Happy Home Pool & Sun Deck playset.

Another version of her was released for World Vacation with the Gelati Scooter playset in July 2017. She appeared in the World Vacation Movie in October of the same year.

A fourth regular-sized version of her was released in the Wild Style series in March 2018.

A new version of her was released with the Lil' Secrets line in August 2018.

She may look chilled but Peppa-Mint is always having meltdowns! Maybe she keeps losing her cool because she's so warm hearted! Shy and a little syrupy, she sticks close to all her friends and loves getting the scoop on all the gossip in Shopville!

The original Peppa-Mint is a light-skinned girl with long light teal hair and big azure. Her lips are dark pink and she has light pink blushed cheeks. She wears a brown headband with a scoop of mint chocolate chip ice cream on it, a strawberry ice cream cone with chocolate syrup, and two pink bows. Her top is made from light brown waffle fabric with the shoulder and lower torso covered in dark brown to resemble chocolate syrup. She wears a light pink skirt with dark pink lining and decoration of pastel polka dots that look like a nut topping. Her shoes resemble her top with a two-tone pink ice cream scoop on the top.

Peppa-Mint wears light pink blush and lipstick, and her light turquoise hair is worn loose in several, thick curls and her bangs are split at the middle and brushed back to the sides of her head. She has a hot pink undertone. She wears her normal headband but with a white, chocolate syrup covered hat and hot pink bow, adorned with pink, chocolate, and azure ice cream scoops. She wears a pale blue top with hot pink cuff and collar, and puffed light brown sleeves. She wears a white apron with dark brown collar and waistband, with pale pink syrup dripping from the bow and a chocolate mint scoop on the left hip. Her skirt is hot pink and white striped with a brown syrup petticoat over it, and she wears pale pink tights paired with pink and white stripe shoes that have azure detail and a pink bow at the middle.

Peppa-Mint has pale pink lips and her light teal hair is worn in thick pigtails hanging from a pair of buns held by a braid around the base. Her short bangs are evenly spread out and she wears a white pair of goggles on her head. Her outfit resembles a dark brown cone with light pink on the top that is partially dripping down the corner, and around the waist is an azure, ice cream scoop-style floatie or belt. She also wears hot pink sandals with ribbons tied around the ankle.

Peppa-Mint pulls her hair into two buns on the side of her head, one entirely pink to accent the streak on her left swept bangs. She wears a yellow headband with a purple two-tone ice cream cone topped with a cherry. Her makeup consists of pale pink lipstick, blush, and eye-shadow. She wears a pale pink dress with lavender sleeve cuff and white and yellow detail on the chest, with a hot pink bow at the middle. Her puffed skirt has a white dripping petticoat covered in colorful dots, paired with textured yellow tights and white heels with a fuchsia stylized heel and lavender dots on the toe.

Peppa-Mint has pink lipstick and blushed cheeks ,and she wears teal eye-shadow. Her long, thick teal hair has streaks of pink throughout it and her bangs are swept to the right with four streaks of dark teal and pink reminiscent of tiger stripes. She wears a teal cat-ear headband with a hot pink bow that has a pink cat-ear ice cream cone, and a furry cat tail. Her outfit consists of a pale mint top and brown cone vest held by a hot pink bow that has a teal ice cream cone on it, teal gloves, and a pink skirt covered in pale pink and brown ice creams and hot pink drips with teal stripes on them and a trim of pale blue lace. Her pale pink stockings drip down from the top, and she wears brown cone shoes with a hot pink ribbon and teal ice cream scoop on it.

Peppa-Mint has fuchsia lipstick and blush ,and she wears glittery light pink eye-shadow. Her eyes have an ice cream scoop icon in them. Her light teal hair is worn straightened and loose with silver streaks and tinsel. She wears a white lace bow with yellow, dark pink, and teal pom-pom in it. Her top is light pink with a hot pink ornate necklace and bow around the waist and her skirt resembles her bow, with additional colored pom-pom in it. Her heels resembles cones with dripping down light blue and pale pink syrup and dollops of cream adorned by a cherry.

She wears lavender lipstick, pink blush, and pale pink eye-shadow. Her eyes are light blue and her teal hair is partially curled and worn loose with a pair of twisted buns and thick, right swept bangs dyed lavender to accent her streaks. She wears a pale pink headband with a puffy bow and stylized lavender and pale pink lock at the middle. Her outfit consists of a pale pink ruffled tank-top with lilac detail and a teal ribbon at the middle adorned by the lock ornament but with swapped colors, puffy teal sleeves worn beneath the shoulder, and a hot pink skirt with designs and a teal trim with a cone pattern. Over her skirt is a glittery purple lace layer. Her purple shoes with a cone texture on the foot and a diamond at the center, and the cuff is teal with a pale pink ornament at the middle. 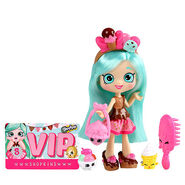 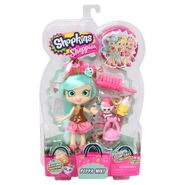 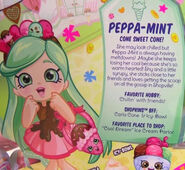 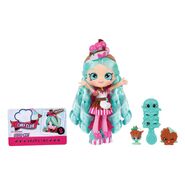 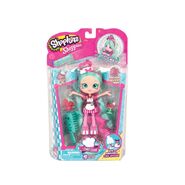 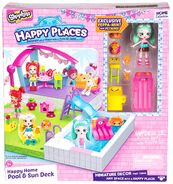 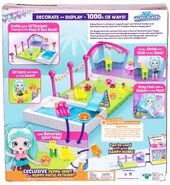 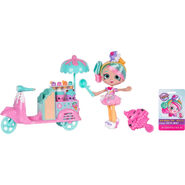 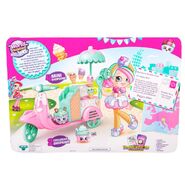 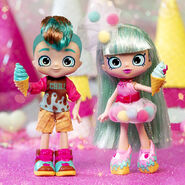 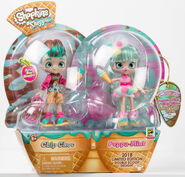 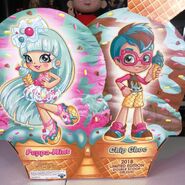 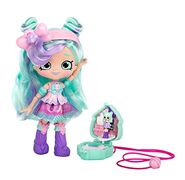 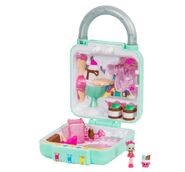 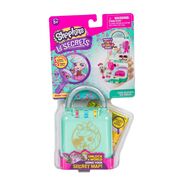 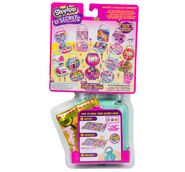 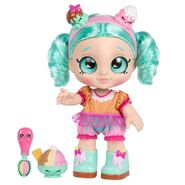 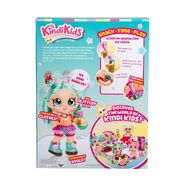