Pineapple Lily is a Shoppie who was released in August 2016. She is included in the Smoothie Truck Combo playset. In September 2016, a slightly different variation of her was released with darker skin and more colors in her hair.

In April 2017, she was released in the second wave of Join the Party Shoppies.

The first variation of Pineapple Lily has a light skin tone with natural pink lips, peach eye-shadow, and pale green eyes. She has long wavy platinum hair with blond highlights and her bangs are braided towards the left, and she wears a chartreuse headband decorated with slices of fruit, a whole pineapple, leaf, and flowers. She wears a yellow top resembling a pineapple with a pink pearl bracelet to match the bow wrapped around her waist, which has pale orange juice tails. Her hot pink skirt has a pointed, layered pale green leaf-like petticoat, and she wears yellow shows with pale pink dripping juice.

When she received a second version, her skin tone was darkened and her hair gained streaks of chartreuse, hot pink, and pale pink. Everything else remains the same.

Pineapple Lily's skin is tanned with pale pink lips and eye-shadow. She wears her blonde, goldenrod, orange, and hot pink striped hair in straightened twin-tails that curve inward. Her bangs are slightly curled and she wears yellow pineapple sunglasses. Her outfit is composed of a chartreuse and yellow top with a layered skirt resembling the skin of a pineapple. On the chest is a pink bow with dripping orange tails and yellow middle, and around her waist is a yellow and hot pink inflatable ring. Her pale green sandals with gold straps and a leaf anklet with a hot pink flower on the corner.

Pineapple Lily's light yellow hair is worn in a curled back ponytail with her braided bangs dyed hot pink and held by matching colored pineapple slices. She has curling inward forelocks that frame her face, one side thicker than the other. On her head are large leaf, a pale pink pineapple, and pale pink pineapple slice. She wears a yellow ruffled dress with leafy collar and sleeves, and hot pink dripping juice drips down beneath it. Her shoes are pale pink with etched details. 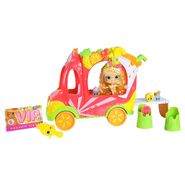 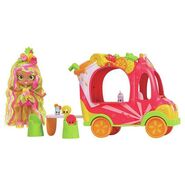 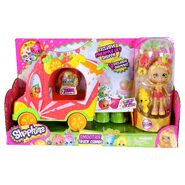 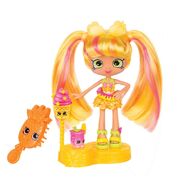 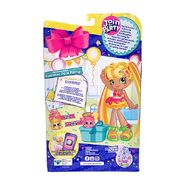 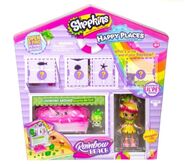 Lounging Around Surprise Me Pack with Pineapple Lily boxed 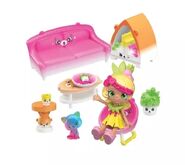 Lounging Around Surprise Me Pack with Pineapple Lily unboxed 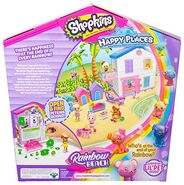 Lounging Around Surprise Me Pack with Pineapple Lily backcard 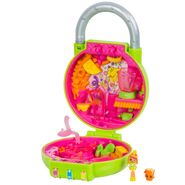 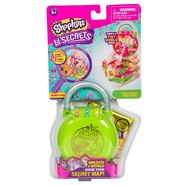 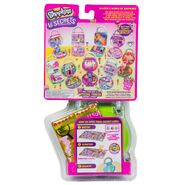 Cutie Fruity Smoothies with Pineapple Lily backcard
Add a photo to this gallery
Retrieved from "https://shopkins.fandom.com/wiki/Pineapple_Lily?oldid=120522"
Community content is available under CC-BY-SA unless otherwise noted.