Polli Polish is a Bathing Bunny Lil' Shoppie released in January 2017 as a part of Happy Places Season Two.

She was released as a full-sized Shoppie in February 2017 as a part of Season Seven.

In September 2017, a new version of her was released with the Fashion Spree Super Shopper Pack.

In January 2019, a Lil' Secrets version of her was released with the Butterfly Nail Boutique Secret Locket as a part of Lil' Secrets Season Two.

Polli Polish - She Nails It!

Polli Polish always has the hottest colors at her fingertips! Splashin' some fashion on her nails is what she does best! But her styles only starts at her fingers, she loves to match it up from head to toe! When it comes the creating the latest look, she nails it every time!

Happiness is always having the hottest colors at her fingertips! Splashin' some fashion on her nails in the bathing bunny bathroom is where you'll find Polli. When it comes to creating the latest look, she nails it everytime.

Polli Polish is a light skinned girl with light pink eyes and bright pink lips, she also has a lavender star under her eye. She has long, straightened electric blue hair worn in a side ponytail with bangs and an angle cut forelock. On her head are silver nail polish and stars. She wears a purple dress with pink drips and a silver vest or sleeves with a dripping pattern. She also wears pastel purple tights and purple Mary-Jane's with drips around the ankle.

This version has slightly tanned skin and wears pale pink blush and silver eye-shadow. Her star is purple. Her hair is worn loose and straightened with her bangs and forelocks pulled back into tightly twisted buns adorned with a purple nail polish bottle, a silver star, and a pink brush with purple dripping polish. On each side of her head is a hot pink streak that goes through the bun, and hanging from each side of her head are curled strands of hot pink and purple hair. Her outfit is composed of a lilac top that has a silver star at the middle and pink sleeves, worn with a pink skirt that has a silver shimmering layer beneath it and a purple drip from the top, beneath purple suspender straps. She also wears purple stockings with lilac shoes that have silver stars on the outer-side, and a pink choker.

Her lips are pale pink and she wears deep purple eye-shadow to match the cheek star. Her hair is stylized the same as before but the loose part is thinned and has streaks of hot pink through it, and her bangs are now loose to frame her face with the streaks lacking from the alternatively styled buns. The ornaments are the same but all silver, and the paint on the brush is deep purple. Her curled strands are much tighter. Her outfit resembles her previous version but the top is pale blue with a deep purple star and lacks sleeves. Her suspenders are hot pink and her skirt has stripes, followed by a shimmering purple layer. Her stockings are lilac and her shoes deep purple to match her choker. 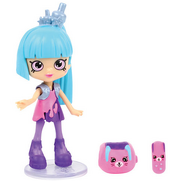 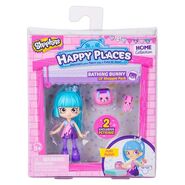 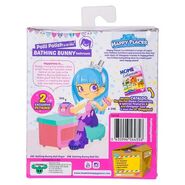 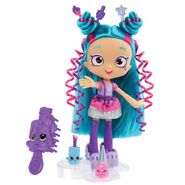 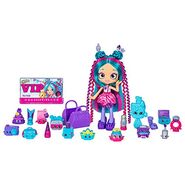 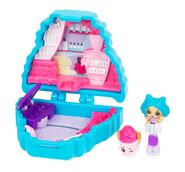 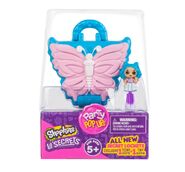 Butterfly Nail Boutique with Polli Polish boxed
Add a photo to this gallery
Retrieved from "https://shopkins.fandom.com/wiki/Polli_Polish?oldid=119243"
Community content is available under CC-BY-SA unless otherwise noted.