Pommie is a Shoppie released in late May 2018 as a part of the first wave of Shop Style! Shoppies.

In August 2018, a Lil' Shoppie version of her was released with the Sleepy Shores Surprise Me Pack as a part of Happy Places Season Five.

In March 2019, a Lil' Secrets version of her was released with the Fab Fairy Fashions Secret Lock as a part of Lil' Secrets Season Two.

I love nothing more than styling it up with pom poms to look sharp! I'm a big softie when it comes to my Shopkin bestie Pammy Pom Pom and helping others, I guess you could say that I'm a Shoppie with a gentle touch.

Happiness is…Always being a big softie when it comes to helping others! Pommie loves to decorate with colorful Petkins to create a bedroom where she can dream about being somewhere over the rainbow! That way this Fluffy Lil’ Shoppie always wakes up sharp!

Pommie has a light tan complexion with lilac and pale pink eyes and pink blushed cheeks. Her eye-shadow and lips are pale pink. She has soft, puffy lilac hair with her bangs swept to the right and thick, curled forelocks. She wears a pink headband with a ribbon hanging from the side and three pom-pom coming in chartreuse, pink, and lavender. She wears a lilac top with a lavender frilly short-sleeve bolero held by a chartreuse ribbon adorned by a pink pom-pom. Her hot pink pleat skirt has a white pattern and images of pom-pom drawn on it, and she wears a chartreuse pom-pom bracelet, along with high pink boots with a pale pink sole and chain of chartreuse bottom around the top and hanging down the middle.

Pommie's eyes are solid lilac and her hair is mostly lilac and pulled back, held by a row of violet pom-pom and ribbons. Her pointed bangs are light blonde. She wears a chartreuse top with a single sleeve and a pom-pom on the right corner, and a pink pom-pom skirt with two separated lilac pom-pom to match her bracelet. Her shoes are chartreuse with a pom-pom on the toe. 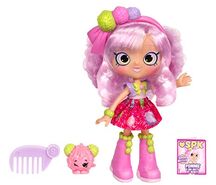 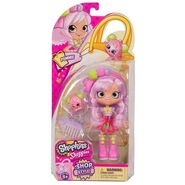 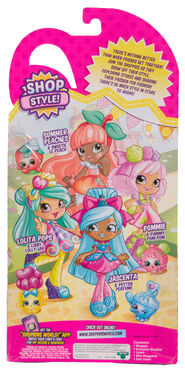 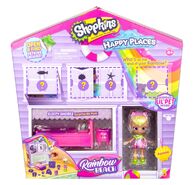 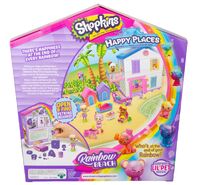 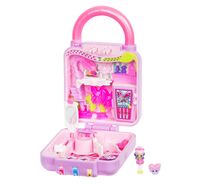 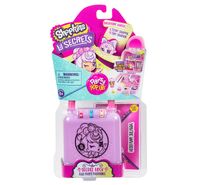 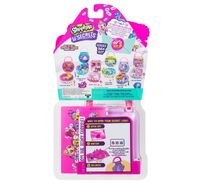 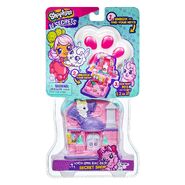 Lovely Llama Style Salon with Pommie boxed
Add a photo to this gallery
Retrieved from "https://shopkins.fandom.com/wiki/Pommie?oldid=121300"
Community content is available under CC-BY-SA unless otherwise noted.