Popette is one of the original Shoppies released on Oct. 1st, 2015.

In Month Year, Popette was released as a Lil' Shoppie in the Movie Night Besties pack with Jessicake.

In May 2019, a new version of her was released in the second wave of Party Pop Ups Shoppies as a part of Lil' Secrets Season Two.

Popette - A Bowl Lot A fun!

Loud and lovable, if there's a camera around you'll see her head pop up! Movies are this Shoppie's life! Popette loves talking about the latest movie she's seen but her Shopkins Besties Bowl-inda and Polly Popcorn are always telling her to "keep a lid on it!"

Favorite Hobby: Poppin' out the Movies!

Popette has a hair complexion with pink lipstick and bright blue eyes. Her eyebrows are slightly darker than her platinum blonde hair, which is worn up in a very curled, puffy hair-do. Her bangs sweep to the right with a single curled strand by each ear. She wears a red headband with several pieces of popcorn, some of which has butter, a small blue bow, and a red and white bag of popcorn. Her outfit consists of a blue bodice with puffy sleeves reminiscent of a big piece of popcorn to match the lining around the bottom. At the center is a red bow. Her red and white striped tutu is lined with buttery popcorn, and she wears red shoes with a yellow heel and short matching socks. On the corner of each shoe is a blue bow.

Her skin and eyes are the same, and her hair is still platinum blonde and headband, but her hair is now worn down. Her bangs and forelocks are slightly stylized. She wears a red and white striped top with blue puffed sleeves lined by popcorn, a puffy red skirt with a blue ribbon on the left hip and popcorn lining, and white tights. Her blue shoes have a gold sole and tongue, and are held by red shoelaces to accent the details covering them. She has a single piece of popcorn at the center.

Popette's eyes, skin, and eyebrows, and hair color are the same. But she wears red lipstick and pink eye-shadow. Her hair is worn in frizzy, large buns and her bangs are split down the middle at chin length with a big curl, and her hair is partially dyed blue. She wears a red headband with popcorn and a red and white striped hat with a blue ribbon and popcorn stacked on it. Her outfit is composed of a white sleeveless top with red lining and gold buttons, with a matching apron hanging down the front of her scalloped blue and red striped skirt. A layer of pale yellow sticks out from the bottom and she has pale yellow popcorn sleeves beneath her shoulder. She wears popcorn shoes with a blue platform sole, and white tights.

The second variant of this features her hair without the frizz and her bangs thicker, with drill-curls. The blue dye is only on her buns. Her lipstick is now dark pink and her eye-shadow is lighter.

Popette's eyes gain a yellow streak and she wears soft pink lipstick and blue eye-shadow. Her thick blonde hair is worn in several, large curls with her bangs swept to the right and the remainder tucked back. She has random sections dyes pink and pink and wears a hot pink ornament and pale yellow butterfly eye mask. She wears a blue scalloped top with a butterfly on each scallop to match the pale yellow neckline. Beneath the chest is a skinny pale yellow band, and her puffed sleeves are hot pink. Her puffy pale yellow skirt has gold and pale pink butterflies on it, and the bottom is lined with peach scallops. She also wears blue ballerina shoes with a butterfly on the toe and a pale pink wing on the ankle, and hot pink stockings with popcorn cuff. On her wrist is a pale yellow popcorn bracelet.

She comes with her two Shopkin BFF's, Bowl-Inda Popcorn and Polly Popcorn. She also comes with a popcorn purse, a doll stand, a VIP card, and a popcorn brush. 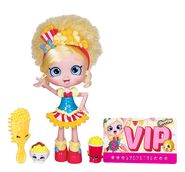 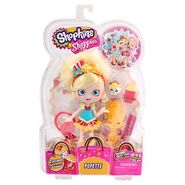 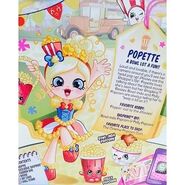 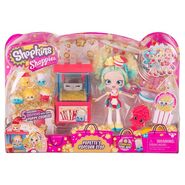 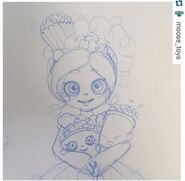 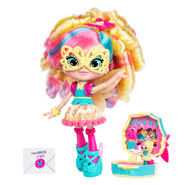 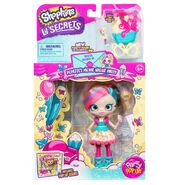 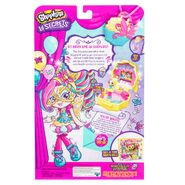 Party Pop Ups Popette backcard
Add a photo to this gallery
Retrieved from "https://shopkins.fandom.com/wiki/Popette?oldid=120571"
Community content is available under CC-BY-SA unless otherwise noted.