Happiness is... Sailing through life with the wind in your hair! Popsi Blue keeps her cool in any situation and never gets hot under the collar. She loves finding Petkins down at Rainbow Beach and sharing popsicle [sic] on a summer's day. The best way to chill is just go with the flow!

Popsi Blue has brown skin and pale pink eyes and lips. Her pale blue hair is worn loose with her bangs ending just above her eyes. She wears a melting blue cap with a yellow rim and neon yellow ornament on the left corner. Her blue dress resembles a sailor uniform, having a pink collar and yellow tie, along with a melting pink Popsicle ornament on the lower corner and two lines of pink around the hem. She also wears pink Mary-Janes and white tights.

Popsi's makeup is the same but with an additional blush and sky blue eye-shadow. Her eyes are pale pink and yellow, and her hair is vibrant blue with pale blue streaks. She wears her hat from the Happy Places variant but the rim is white and her Popsicle is pink and yellow. She wears a blue top with white lining and sailor collar with light pink detail and a yellow ribbon hanging from it, adorned by a light pink Popsicle. Her bottoms are light pink, and she also wears translucent green sandals with the ankles partially melted. 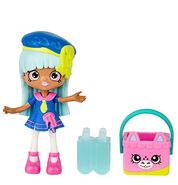 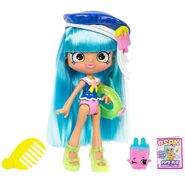 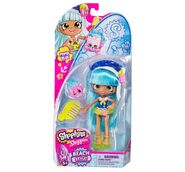 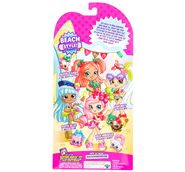 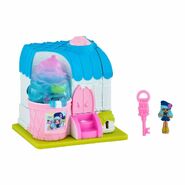 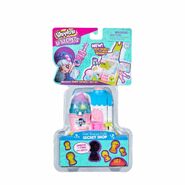 Cool Scoops Café with Popsi Blue boxed
Add a photo to this gallery
Retrieved from "https://shopkins.fandom.com/wiki/Popsi_Blue?oldid=119262"
Community content is available under CC-BY-SA unless otherwise noted.