Pretti Pressie is a Shoppie released in April 2017 as a part of the second wave of Join The Party! Shoppies as a part of Season Seven.

In September 2017, she was released with a recolor of the Party Game Arcade playset as a part of Season Eight.

When it come[sic] parties, Pretti Pressie has it all wrapped up! Full of surprises, this gifted Shoppie always gives more than she receives. So get set to unwrap some fun, it's party time with the prettiest Pressie around!

Pretti Pressie has fair skin with light blue eyes, a very faint blush and eye-shadow, and pale pink lipstick. Her azure hair is waist length an straightened with glittery tinsel strewn through it, and she has a portion of hair tied into a bow-shaped bun on the right of her head. She wears a yellow headband with cherry and yellow wrapped presents and ornaments. Her pale yellow top has a n azure heart at the middle with white and mauve streamers and a white wing-like collar and sleeves. Her skirt is in two puffed layers, one partially sticking up, both with a colorful azure, pale yellow, white, and cherry block, stripe, and ribbon pattern. On the back is a velvet mauve ribbon, and she has yellow and cherry shoes with a decorative bow at the middle, worn with frilly white socks.

Pretti's makeup is the same and her hair is half azure and half pink, worn in braided twin-tails with a large, two-layer pastel purple bow on her head. Her white dress has a hot pink and light blue heart design on the chest and pink collar and sleeves. Her skirt is covered in hot pink, light blue, and pink dots of various sizes, and she wears purple and pink shoes resembling her original pair, and light blue tights. 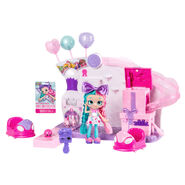 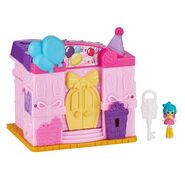 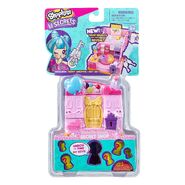 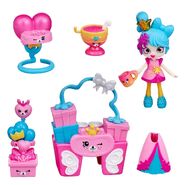 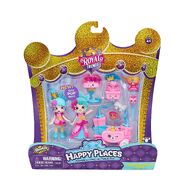 Squirrel Palace Party with Pretti Pressie boxed
Add a photo to this gallery
Retrieved from "https://shopkins.fandom.com/wiki/Pretti_Pressie?oldid=121302"
Community content is available under CC-BY-SA unless otherwise noted.