Rainbow Kate is a Shoppies character originally released in June 2016.

In early 2017, she was released with the first wave of Join the Party Shoppies.

In October 2017, she was released in the Shoppies BFF Travel Pack along with Bubbleisha, Jessicake, and Donatina.

Rainbow Kate - A Piece of Cake

Being brilliant is a piece of cake for this Shoppie! Full of fun and always on the go, nothing is ever done slow! Her friends never feel down when she’s around because she brightens up the gloomiest day! And how do her Besties find her when she’s out shopping? Easy, they just look up and follow the rainbow!

Happiness is makin' it happen in the Kitty Kitchen! This girl is totally brilliant when it comes to mixing it up and creating taste sensations with her Petkin friends!

"Happiness is…packing a picnic and chasing rainbows in the Happy Convertible!
Rainbow Kate loves to feel the wind in her hair and drive to Rainbow Beach for a picnic with some colorful Petkins. Life is a highway and Rainbow Kate is ready to follow the sun for some summer fun!"

Rainbow Kate has a fair complexion with light purple eyes, light purple freckles, and pale pink lips. Her curly purple, light blue, pink, and yellow hair is worn loose with straight across bangs. She wears a blue top with a pink heart on it, along with yellow ruffled sleeves and collar. Her two layer skirt is pink on top with tiny colorful dots, while the second layer of the skirt is rainbow striped to match her hair. She wears light blue sandals with a yellow platform sole that has a pink stylized heel, along with lilac tights. On the top of her head is a puffy yellow chef hat with pink icing next to a white iced cake with pink, purple, and yellow inside.

Her Happy Places version is based off of this but with differences. Her lips are light purple and her lavender hair is closer to her head in tight curls with dyed streaks of pastel pink, blue, and yellow. Her headband and the decorations on it are lavender except for one yellow colored cake. Her top is lavender with a heart on it and the same collar and sleeves from her bigger version, and she wears a pink skirt with yellow bunched lining. At the middle is a light blue bow to match her shoes.

Rainbow Kate's eyes gain a streak of pale pink and she has pink lips. Her slightly light purple curled hair is worn in low, bunched pigtails with streaks of pale pink, yellow, and blue and she has straight cut bangs. She wears an indigo headband with hot pink hearts attached to a white band on each side, each with pale pink frosting. She wears a light pink sweet-heart top with dots and a line of white dots lining the top. Her sleeves are yellow and puffy, and around her neck is an indigo ribbon. Her yellow tutu has a pointed pink, purple, white, hot pink, pale blue, and yellow striped layer over it, and she wears hot pink shoes with ribbon wrapped around the leg and white scallops lining the foot insert. She has pale blue wings with white frosting on top.

Her lavender hair is worn in tightly curled, drill-like pigtails held by yellow pom-pom scrunchies with dyed tips, the right being pastel pink and the left pastel blue. Her bangs remain straight cut. She wears a yellow and violet top with a yellow ornament at the center and a yellow ruffled skirt, along with pink shoes and leggings.

Rainbow Kate has pink lips and her light purple hair worn in a long, tightly curled ponytail with streaks of dark pink, light blue, and yellow through it. Her bangs are entirely held back and she has short curled strands by each ear. Her lilac headband is decorated with fuchsia and dark purple flowers, and a yellow ornament. She wears a magenta dress covered in yellow dots and lining, the sleeve and skirt both are in two layers, and a the chest are dark purple flowers. Her shoes are fuchsia with a dark purple flower on the side of the strap. She also has a sky blue bead necklace.

Rainbow Kate has light blue eye-shadow, pink lips, and a rosy blush. Her light purple hair is shorter than usual and curled inward with streaks of rose and blue, and her bangs are partially swept to the right. She wears a lilac headband with yellow pastries on top of a azure and white scalloped piece, along with white and hot pink bunny ears to match her fluffy tail. She wears a yellow scalloped top with pink lining at the neck and beneath the chest to match her frilly sleeves, paired with a rainbow striped puffed shorts that have dots going down the side and white trim. Her yellow heels have a hot pink heart on the toe with bunny ears, worn with frilly white socks to match her gloves.

This version partially resembles her Happyville High School one. She has curled, bubble-like pigtails with a light blue ombre, held by raspberry scrunchies. Her bangs are straight cut and she has pale pink lipstick. She wears a pale pink dress with a hot pink collar and bunched lining on the skirt, and at her waist is a yellow bow beneath a light blue heart. She wears purple shoes with ankle straps and an etched design on the front.

Rainbow Kate's hair is worn up in buns with a yellow decorated eye-mask that has raspberry frosting dripping down. Her lips and cheeks are light pink, and she has pale blue eye-shadow, along with a design on her right cheek. She wears a yellow and lavender frilly top with a pale purple star at the middle with raspberry detail on the shoulders, along with a pink skirt that has a lilac and yellow dot pattern and yellow lining. Print on the skirt are various designs and big colored stars, Her slippers are raspberry, worn with lilac crimped socks.

Rainbow Kate comes with a yellow hairbrush, a VIP card, a clear doll stand, and a blue handbag.

The Shopkins included are Rayne-Bow and Raylene Rainbow. 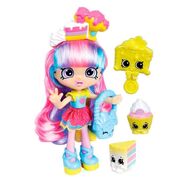 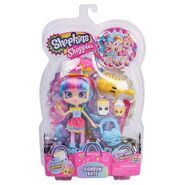 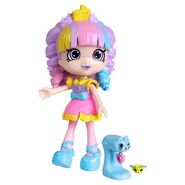 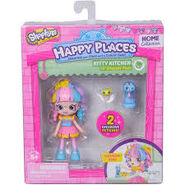 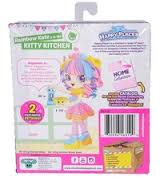 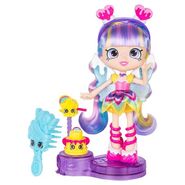 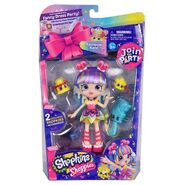 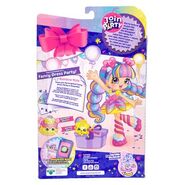 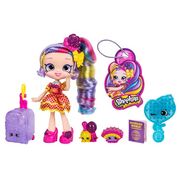 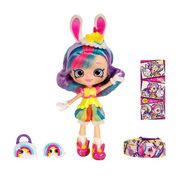 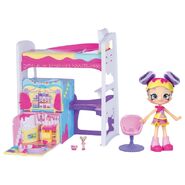 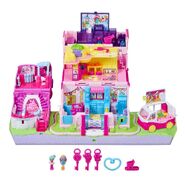 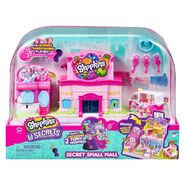 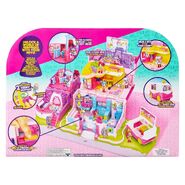 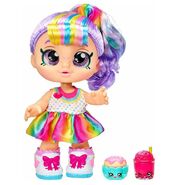 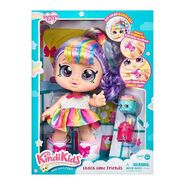 Kindi Kids Rainbow Kate boxed
Add a photo to this gallery
Retrieved from "https://shopkins.fandom.com/wiki/Rainbow_Kate?oldid=121509"
Community content is available under CC-BY-SA unless otherwise noted.