Sarah Fairy Cake: A pretty little cake who so [sic] fluffy and light she thinks she can fly! She loves to have fairy parties with her friends at the bottom of her garden.

Sarah Fairy Cake is a peach fairy cake in a pink wrapper. She has peach frosting, sprinkles, and a peach-colored dollop of whipped cream. She is decorated with blue fairy wings and is holding a pink star wand.

Her variant is a purple fairy cake in a mint wrapper with purple frosting, sprinkles, and a purple-colored dollop of whipped cream. She is decorated with red fairy wings and is holding a mint star wand. 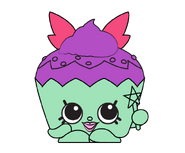 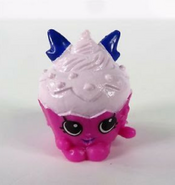 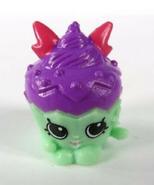 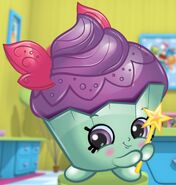 Cartoon Sarah Fairy Cake
Add a photo to this gallery
Retrieved from "https://shopkins.fandom.com/wiki/Sarah_Fairy_Cake?oldid=118805"
Community content is available under CC-BY-SA unless otherwise noted.