Season Two is the second overall season of Shopkins which was released in November/December 2014. This season introduced new "Mini Shopkins" and the special editions are "Baby" items such as baby bottles and diapers/nappies. This season also introduces three other teams, Homewares, Cleaning & Laundry, and Shoes. The Baby Shopkins are flocked (covered with a thin layer of fuzz). The "Crystal Glitz" Shopkins are the ultra rare Shopkins for this season and are made translucent, like the frozen Shopkins from Season One, but with glitter inside of them. The Limited Edition Shopkins are "bling," which means they are covered with a heavy layer of glitter. The Limited Editions are also now found in Blind Baskets. The bags are now purple and the baskets are pink with purple handles instead of the original blue color.

These new characters are different from the Season One Shopkins, since they have smaller eyes, the addition of eyebrows, and small S's on their backs.

Like in Season One, some Shopkins were unavailable for a period of time and were released after the others. These were known as "Wave Two characters." These characters included: 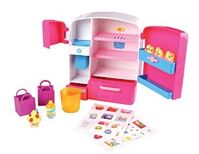 The So-Cool Fridge out of its packaging
Community content is available under CC-BY-SA unless otherwise noted.
Advertisement