Sneaky Sally is a rare Shoes Shopkin from Season Three.

Running up and down basketball courts.

Your friends would describe you as:

A real sneaky mover with a bouncy personality. Loves being a step ahead of her friends.

Sneaky Sally is a green and white sneaker shoe with a pink tongue and purple laces.

Her variant is purple and white with a teal tongue and yellow laces.

She is also included in the Target exclusive Shopkins Mystery Edition 40 pack. This exclusive is a pink and orange sneaker shoe with a yellow tongue and yellow laces. She also has an aqua circle with an "S" in it.

There is also a variant of her from the Shopkins Glamour Squad pack. This variant features her as a pink and white sneaker shoe with a a white tongue, a pink bottom, and aqua laces. She is lightly coated with glitter. 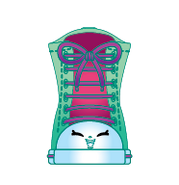 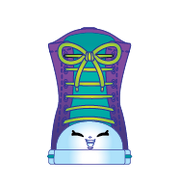 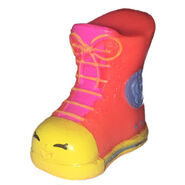 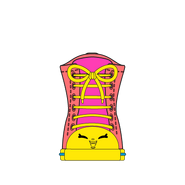 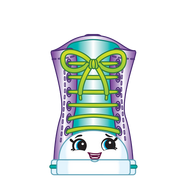 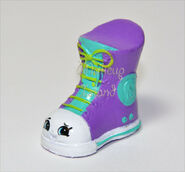