Sneaky Speedster is a Limited Edition Season One Cutie Car. Only 1000 of her were produced.

Fast, fashionable and street-wise, Sneaky Speedster can jump so high she can almost fly! With wings covered in bling, she's a Cutie Cars who likes to put the pedal to the metal!

A glittery white convertible car with a pink muzzle and interior. She has gold wheels and on her forehead is a ribbon design to resemble shoelaces. The gold detail on her sides resemble that found on a shoe, consisting of stitched detail, stripes, dots, an a star. Her roof joint is gold with a wing on each side. 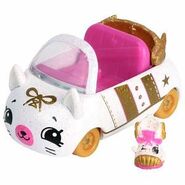 Add a photo to this gallery
Retrieved from "https://shopkins.fandom.com/wiki/Sneaky_Speedster?oldid=118462"
Community content is available under CC-BY-SA unless otherwise noted.