Spaghetti Sue is a Kitty Kitchen Lil' Shoppie that was released in August 2016 as a part of Happy Places Season One.

In June 2017, a full-sized Shoppie version of her was as a part of Season Eight.

In August 2018, a Lil' Secrets version of her was released with the Pizza Paradise Secret Locket as a part of Lil' Secrets Season One.

It's Spaghetti Sue! All the way from pretty Italy! Join me and my two "Bella Besties"—Lyn Gweeni and Mario Meatball as we discover masterpieces galore and food you'll adore. We can share the perfect pasta or a leaning tower of pizza! Ciao!

Happiness is...
Creating pasta perfection in the Kitty Kitchen with her Petkin friends! Spaghetti Sue knows what to do to be a Pasta Master. She adds a touch of Italian style to everything she cooks!

Spaghetti Sue is a light-skinned girl with chartreuse eyes, red lips, and long blonde hair pulled into a ponytail with several curls and wavy strands, making them resemble spaghetti noodles. She has a single curled strand at her forehead and she wears a red hair bow. Her teal dress has a red piece of fabric wrapped around her shoulders to match the lining around the bottom of her skirt, and around her waist is a white frilly heart-shaped apron with a ribbon on it. She also wears white tights and red shoes with a bow on the foot.

This version of Spaghetti Sue has peach lipstick, pale peach blush, and peach eye-shadow. Her eyes and hair are the same color, but her hair is worn loose with several long curls on the right of her head and her bangs brushed to the right tucked beneath them. Across her head is a braid, and she wears a red headband with two noodles shaped like a heart and four large teal leaf. She wears a white blouse with a black corset held by teal string. The neck and sleeves have red detail to match her ruffles skirt, which has a gold noodle pattern and frilly white petticoat. Her shoes are gold with ribbon on the toe and a light red sole with curled designs. 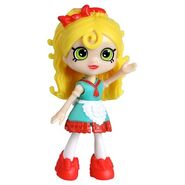 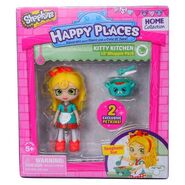 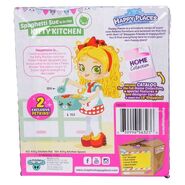 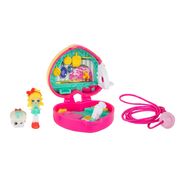 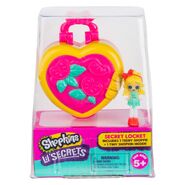 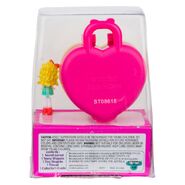 Pizza Paradise with Spaghetti Sue backcard
Add a photo to this gallery
Retrieved from "https://shopkins.fandom.com/wiki/Spaghetti_Sue?oldid=119274"
Community content is available under CC-BY-SA unless otherwise noted.