Starlette is a Happy Mermaid that was released in January 2019 with the Dreamy Reef Surprise Me Pack as a part of Happy Places Season Six.

In March 2019, a Lil' Secrets version of her was released with the Mermaid's Adventure Secret Locket as a part of Lil' Secrets Season Two.

Starlette has fair skin with puckered, pale pink lips and eyes. She has a pink star over her left eye, matching the large magenta one worn in her platinum hair, which is worn in a small curled ponytail with wavy bangs. She wears a pastel yellow ruffled top with a magenta trim around the top and a large star at the center. Her tail matches in color scheme with a star themed waistband and her fin composed of several magenta points and two white star segments sticking out of them. 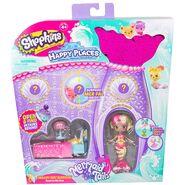 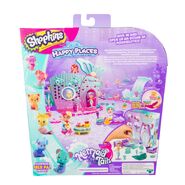 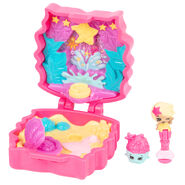 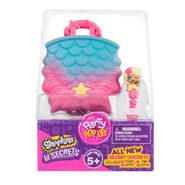 Mermaid's Adventure with Starla boxed
Add a photo to this gallery
Retrieved from "https://shopkins.fandom.com/wiki/Starlette?oldid=120372"
Community content is available under CC-BY-SA unless otherwise noted.