Classic
Taco Terrie is a rare International Food Shopkin from Season Three. In Season Ten, he is released as a common Takeout Shopkin.

This Tex Mex is full of beans and can go a bit over the top! Then he starts to become hard to handle!

Taco Terrie may be full of beans, but he's the life of every party. When there is a fiesta, this spicy senor has no time for a siesta!

Taco Terrie is a taco with beef, lettuce, and tomatoes inside a yellow taco shell.

His variant is a taco with light-colored meat, darker red tomatoes, and blue-greenish lettuce inside an orange taco shell.

His cartoon artwork depicts him as having the same colored lettuce, shell, and tomatoes as his original toy, but the meat is depicted as pink and his eyebrows and mustache are blonde. It also depicts him holding a tortilla sombrero filled with chips as well.

He is also included in the Shopkins Mystery Edition 40 pack. This exclusive is a taco with orange meat, orange shell, light red tomatoes, and lime green lettuce.

There are also two variants of him from the Christmas Blind Baubles. The first variant features him as a taco with white beef, green lettuce, and silver tomatoes inside a red and white shell.

The second variant features him as a taco with white beef, white lettuce, and green tomatoe inside a white fading to light blue ombré shell.

There are two variants of him in the Food Fair lunchbox blind bags. The first variant makes him a two-toned light blue and green taco with pale orange tomatoes.

The second variant makes him a two-toned neon orange and neon yellow taco with teal tomatoes.

For Season Ten, he is released as his original Season Three version, but his right eye is winking. 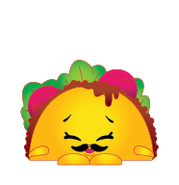 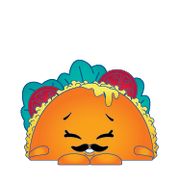 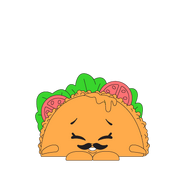 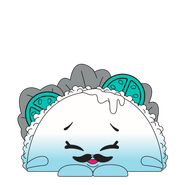 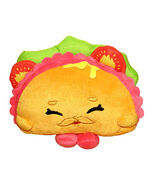 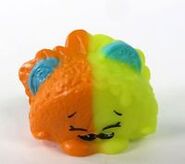 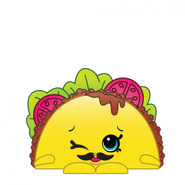 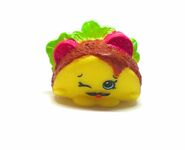