Tiara Sparkles is a Lil' Shoppie from Happy Places Season One. She debuted in 2016 at the same time as Kristina Apples and Riana Radio as part of the Kitty Dinner Party mini-set. She comes with a candlestick and a candle.

In 2017, she was released as a full-sized Shoppie as a part of the first wave of Join the Party Shoppies.

Happiness is hosting a dinner party fit for a queen! Designing the perfect place with the finest of taste is what Tiara Sparkles does best. She always makes sure the evening sparkles as bright as her shining Petkin friends.

Tiara has fair skin with sky blue eyes and cherry lips. Her hair is pulled up into a ringlet with a gold tiara, and her forelocks are curled and frame her face, with her bangs brushed to the left. She wears a gold and light pink dress with a heart at the middle, and her skirt is divided into petals with a cherry layer beneath it. She also wears white tights and light pink heels with ankle straps and a crown on the toe.

This version has a light complexion with golden eye-shadow, pale pink blushed cheeks, and dark red lips. Her hair is dirty blonde and worn loose into several tight curls, with her forelocks reminiscent of her original but much longer. Her gold tiara is attached to a headband and has a garnet gem in the middle. Her dress resembles the original, composed of a red top with a big gold and red heart on the chest and light pink puffed sleeves. The skirt layers resemble the original but have gold ornate detail. She also wears white tights and gold shoes with a garnet gem on the foot. 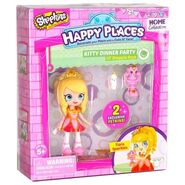 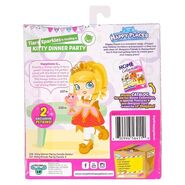 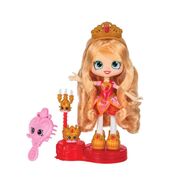 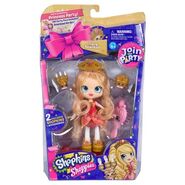 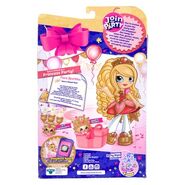 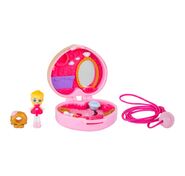 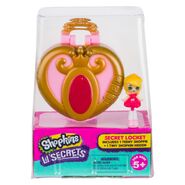 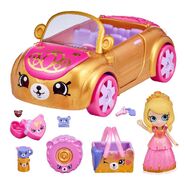 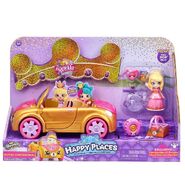 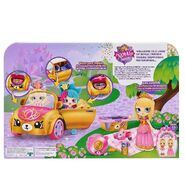 Royal Convertible with Tiara Sparkles backcard
Add a photo to this gallery
Retrieved from "https://shopkins.fandom.com/wiki/Tiara_Sparkles?oldid=120075"
Community content is available under CC-BY-SA unless otherwise noted.