Dazzling
Twirly Spaghetti is an ultra rare Family Food Shopkin from Season Six. She is the product of the Spaghetti Bolognese recipe.

Twirly Spaghetti is a silver/blue bowl containing golden spaghetti noodles. The noodles are topped with tomato sauce and basil leaves. She appears to be slurping one of the spaghetti noodles dangling down from her head. 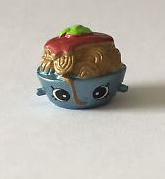 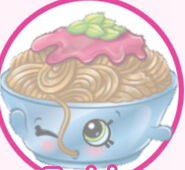 Twirly Spaghetti static art
Add a photo to this gallery
Retrieved from "https://shopkins.fandom.com/wiki/Twirly_Spaghetti?oldid=125010"
Community content is available under CC-BY-SA unless otherwise noted.