Hey everyone! We found a lot of listings from Walmart and Target on Brickseek.com for new Shopkins products!

Millie Bobby Brown
Add a photo to this gallery

The theme for Shopkins Season 13 is Back to School Shopkins Style which reminds me a lot of Happy Places Season 3. For wave one anyway, there will be four Shoppies which are all returning characters except for Teacheryl, and this is the first time that Cici Science will be released as a large-sized Shoppie doll! The packs for this season will contain 1, 12, and 30 Shopkins and the Shopkins themselves will be themed around school supplies, classes, and cafeteria food. Aside from these there is a new four pack of Shoppets (names are not yet known), and two playsets; a study station and a large schoolhouse. Target does not show the prices for the products yet, but since the schoolhouse is five feet tall, I would expect it to be worth a lot more than standard playsets.
The theme for Happy Places Season 8 is Missing Magic! I have only found listings for six Lil' Shoppies, most of which are new characters, but there also was a listing for a new DVD of a new Missing Magic special which is set to be released in December of this year! Here is the movie special's description: "Famous Shoppie Mystabella suddenly learns that she is a fairy, and sets out on a journey to find the Magical Fairy Grove, the home of the Fairy Shoppies. When she finally gets there, the entire grove has been destroyed! Can her newly discovered fairy powers recover the home of the fairies before it's too late?" 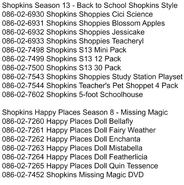 Are you excited for all of these new Shopkins products? Comment down below!

Retrieved from "https://shopkins.fandom.com/wiki/User_blog:TheSnuggleKinz/CELEBRITY_SHOPPIES,_NEW_MOVIE,_SHOPKINS_S13,_HAPPY_PLACES_S8!?oldid=118020"
Community content is available under CC-BY-SA unless otherwise noted.