Valentina Hearts is a Lil' Shoppie that was released in the Cozy Bear Bedroom as a part of Happy Places Season Three. She was also released with the Heart'n' Seekers Tribe as a part of the second wave of Wild Style Shoppies.

In September 2018, a Lil' Secrets version of her was released with the Picnic Dreams Secret Locket as a part of Lil' Secrets Season One.

Valentina Hearts: Wild at heart and a Wild Style to match, Valentina Hearts has a look that everyone loves! And her little sweetheart Shopkins - Darci Diary and Loni Locket are the perfect friends because their love never ends!

Valentina Hearts loves being a sweetheart to all her friends. There's nothing like opening her heart and sharing the love with her precious Petkins in her Cozy Bear Bedroom. This girl has a heart that beats so sweet!

Valentina Hearts has fair skin and pale pink eyes. Her lips are baby pink and her hair is magenta, worn mostly loose with a small flare on the tip, and she has a braid across her head and two buns forming a heart on the top corner and by the right ear. She wears a pale pink dress with a stylized white heart on it that says Love written in magenta and has white sleeves, along with a white bracelet, tights, and shoes with stylized magenta hearts.

Valentina's eyes, skin tone, and lips are the same, but she also wears pale violet eye-shadow and rosy blush with two hearts on her left cheek. Her hair is worn in tightly curled twin-tails and she has two loose strands at her forehead forming an upside-down heart, worn with a magenta headband with mouse ears and two hearts, one of which is pale pink with Love written in white and adorned by a purple bow. She wears a fuchsia textured top with a light blue and purple collar and a layered, scalloped hot pink skirt covered in pale pink, dark pink, pale blue, and light purple upside-down hearts. She also wears azure tights and raspberry heels with purple on the pale pink heart and sole. She also has a curling pale pink mouse tail. 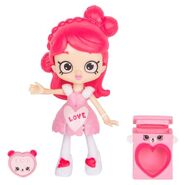 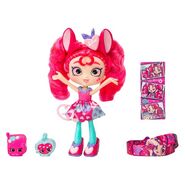 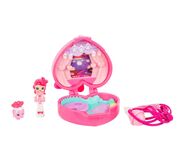 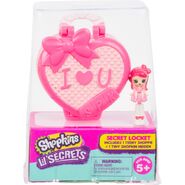 Picnic Dreams with Valentina Hearts boxed
Add a photo to this gallery
Retrieved from "https://shopkins.fandom.com/wiki/Valentina_Hearts?oldid=119284"
Community content is available under CC-BY-SA unless otherwise noted.