Veronica Vase is a common Homewares Petkin from Season Five.

Veronica Vase: Always looks as fresh as a daisy and smells as sweet as a rose! She's the pick of the bunch when it comes to choosing a blooming good friend!

Veronica Vase is a green vase with a yellow pattern on top. In the vase, there are red flowers. She has dog-like ears and a snout.

Her variant is a pink and blue ombré vase. In the vase, there are yellow flowers. She has dog-like ears and a snout. 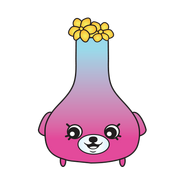 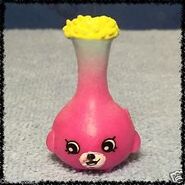 Veronica Vase variant toy
Add a photo to this gallery
Retrieved from "https://shopkins.fandom.com/wiki/Veronica_Vase?oldid=120918"
Community content is available under CC-BY-SA unless otherwise noted.