Wise Fry is an exclusive Shopkin from Season One of the Food Fair range. He is included in the Fast Food Collection.

Enjoys practical jokes. Loves to team up with other fast foods. Loyal to the last fry! He's always on your side.

Wise Fry is a red box of orange fries with four white stripes and a yellow "S" in the middle. He is holding a green sauce packet.

There are no variants of him. 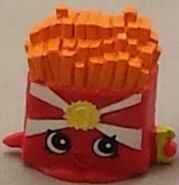 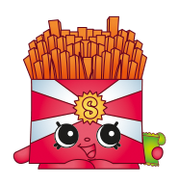 Wise Fry collector's tool art
Add a photo to this gallery
Retrieved from "https://shopkins.fandom.com/wiki/Wise_Fry?oldid=120922"
Community content is available under CC-BY-SA unless otherwise noted.